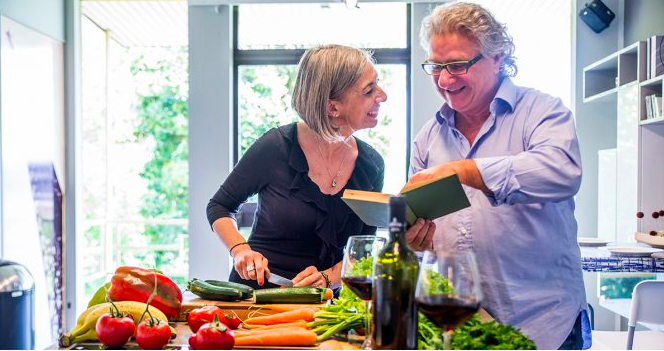 For decades now, the Mediterranean diet has been touted as the gold standard diet to ward off extra pounds and disease, but the coastal diet has a few lesser-known women’s health benefits, as well.

A healthy diet may be a great foundation for a healthy pregnancy, but did you know diet may also help your fertility if you’re undergoing treatment? Researchers in the Netherlands found that among 161 couples undergoing fertility treatment, women whose eating habits closely resembled the Mediterranean diet were 40 percent more likely to become pregnant than those whose diet was least like the coastal diet.

After combining the results of three large studies, researchers in Italy analyzed the eating patterns of over 5,000 women in Europe and found that those who stuck most closely to the Mediterranean diet were over 50 percent less likely to develop endometrial cancer. In addition, researchers found a strong correlation between the Mediterranean diet as a whole and risk of endometrial cancer, versus only adhering to single components of the diet.

Breast cancer is the most commonly diagnosed cancer in women and is the second leading cause of death among women, making prevention more important than ever. According to data compiled over the course of five years on the eating behaviors of 4,200 women between the ages of 60 and 80, those who followed the Mediterranean diet were 51 percent less likely to get breast cancer than those who followed a low-fat diet.

A study published in the Journal of American Medical Association showed that women who ate a Mediterranean diet were slightly less likely to suffer from hip fractures. The 16-year study included over 90,000 women with an average age of 64 and at the end of the study, women who adhered the most to the Mediterranean diet were .29 percent less likely to suffer from a hip fracture than women who did not adhere to the diet.

A colorful diet, like the foods in the Mediterranean diet, is not only pleasing to the eye but can also be beneficial for your eye health. The American Academy™ of Ophthalmology reports that Mediterranean diet staples like dark leafy greens, oranges, peppers and sweet potatoes are eye health superfoods due to their high antioxidant levels.

A study in the Journal of American Medical Association Ophthalmology also states that people who eat just one serving of fish a week have a 31 percent lower risk of developing age-related macular degeneration at an early age. In addition, adding one or two servings of nuts per week is also associated with a 35 percent lower risk. Both are due to the high levels of omega-3 fatty acids found in those foods, which has been shown to protect your retinas from cell damage.

How to Live Mediterranean

Need some help kick-starting your Mediterranean diet? Try these five steps to incorporate more of the coastal diet’s essentials into your daily routine: